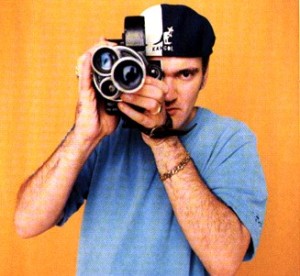 by HakSnider33
Previously, we explored what happens when a hack director pays homage to a scene from a superior film by clumsily directing a scene that plays like a pale facsimile of the original scene.   However, when done correctly, an homage can breath new life into a cliched or inferior scene.  The man who is obviously known as the master of this is Quentin Tarantino.  Although his detractors label him a poseur without an original bone in his body, his films have exposed many film aficionados to older and forgotten films through his clever homages.

Examples include KILL BILL VOLUME 1 (2003), which introduced many to 70’s cult Asian films such as LADY SNOWBLOOD (1973) and MASTER OF THE FLYING GUILLOTINE (1977), PULP FICTION (1994), which introduced younger viewers to films by French New Wave directors such as Truffaut and Godard and of course, Tarantino’s JACKIE BROWN (1997), which started a revival of interest in Blaxpoitation films such as FOXY BROWN and SUPERFLY.  However, it is the homage that Tarantino’s first feature film, RESERVOIR DOGS (1992), pays to Ringo Lam’s 1987 Hong Kong gangster film CITY ON FIRE that his critics point to as evidence of his originality.

Lam’s film is a quality action film, but I seriously doubt that anyone outside of the most hardcore Asian cinema fans would have ever heard of City on Fire if it were not for the success of Tarantino’s Reservoir Dogs.  However, the main point that should be made is that the scenes that were allegedly “ripped off’ from the Hong Kong film were done more effectively by Tarantino in Reservoir Dogs.  This is what differentiates Tarantino’s work from the inferior job that Zach Snyder did in lifting scenes from the Korean film OLDBOY for inclusion in WATCHMEN, as detailed in the previous article.

The main scene that the Anti-Tarantino mob points to as evidence of shameless thievery is the Mexican standoff scene at the end of Reservoir Dogs.  Nobody can argue with a straight face that there is not a very similar scene in City on Fire.  However, a comparison of the two scenes does not reveal Tarantino to be hack and instead offers a glimpse into what makes him so great.   First, we will take a look at the scene from Ringo Lam’s film.

This is undoubtedly a dramatic scene consisting mostly of alternating two shots that clearly place the undercover cop, played by Chow Yun Fat and the gangster who has befriended him (Danny Lee) on one side and the other two gangsters on the other.  The claustrophobic feel brought about by the tightness of the shots definitely adds to the tension.  It is a nice scene, but not one that would have been remembered as a great scene on its own.  Now, we will take a look at Tarantino’s scene.

Reservoir Dogs (1992, dir. Quentin Tarantino) - Click on the image to view the clip

One thing that undoubtedly makes Tarantino’s scene much more powerful is that, unlike in Lam’s scene, the Reservoir Dogs Mexican Standoff scene is the final scene in the film.  The only character to survive the scene is Mr. Pink (Steve Buscemi).  Additionally, Tarantino’s scene contains much more visual variety, blending numerous closeups with much wider shots.  The wider shots emphasize the increased spacing in Tarantino’s scene. In my opinion, the Reservoir Dogs scene is vastly superior not only because it visually more interesting, but also because it is simply more dramatic and important to the story, being the final scene in the film as opposed to a throwaway standoff.  The homage was done artfully, showing off Tarantino’s undeniable visual style in the way he took the best elements from a decent scene and crafted a final scene that people are still talking about nineteen years later.

What do you think?  Did Tarantino “pay respect” to Ringo Lam’s City on Fire by including the standoff in Resevoir Dogs or did he simply “rip off” a more original and creative filmmaker?