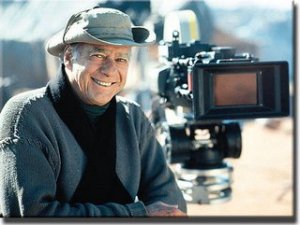 Although acclaimed director John Frankenheimer (1930 – 2002) is probably most well-known for his classic mind control epic THE MANCHURIAN CANDIDATE (1962), I’d like to take a brief moment to recognize him for his ability to craft intensely realistic car chase scenes, something that is absolutely required of any director wishing to make a living in the action/thriller genre.

Frankenheimer was clearly a “car guy” who was really into the technical aspects of immersing the viewer in the sense of speed and danger.

Here in this long clip from GRAND PRIX (1966, nominated for a Directors Guild of America award for Outstanding Directorial Achievement), Frankenheimer uses a wide variety of camera-mounting techniques to give the viewers a taste of the intensity of motorsports.  And check out how his cutting style goes from long takes to quick cuts to pump up the tension, particularly during the climactic end of this clip.

Frankenheimer employed the same types of techniques in 1998’s RONIN: mounting a camera low on the front of the car to denote speed, using helicopters to track from overhead, adding danger to the setting by allowing people out onto the “course”.  This is the stuff that gets the viewer on the edge of their seat.

Can a creative car chase overcome a sketchy story and awful acting?  No, but it can make a movie worth watching, and certainly explains the commercial success behind horrible movies with cool car scenes.