by HakSnider33
Ever since HBO’s groundbreaking series The Sopranos changed the television landscape forever with its debut in 1999, the cable television drama has rapidly developed into a vital art form that has, in many ways, stolen a substantial amount of thunder from the Hollywood motion picture industry. Cable television series, such as Breaking Bad, Game of Thrones and The Wire, have deservedly received critical acclaim, while pushing the envelope of cinematic storytelling. Among the most influential of the series currently airing is AMC’s Mad Men, a dramatic series created by showrunner Matthew Weiner. With its unique brand of dark, edgy drama and black comedy, Mad Men has made an indelible mark on pop culture, both in terms of fashion (the return of the 60’s) and the creation of new stars, such as Jon Hamm and Christina Hendricks.

Before analyzing Weiner’s filmmaking skill set and potential to achieve visionary status as a film director, let us first take a look at the track record of television showrunners who have made the transition to feature filmmaking in a directorial capacity. Top-of-the-food-chain television visionaries, such as David Milch (Deadwood) and David Chase (The Sopranos), have not yet made this jump (although Chase recently directed Not Fade Away, a feature that will be released this fall). However, J.J. Abrams and Joss Whedon are two highly successful network television creator/showrunners who have been able to transition between the worlds of film and television. An analysis of their careers may shed some light on what it takes to make the TV-to-film transition.

The creator of Buffy the Vampire Slayer and Firefly has never successfully replicated his television success on the big screen. Although I would not go as far as to say that Whedon is a true television visionary, Buffy succeeded for several seasons as a genre-bending hit, combining horror, action, comedy and teen drama in a beautifully written and produced package. The series also demonstrated Whedon’s ability to create a very rich original mythology and universe (“The Whedonverse”).

His most successful feature film Serenity, which was the film follow-up to his short-lived cult classic series Firefly, earned just under $40 million at the box office. However, Marvel Studios is betting big that his knowledge of the comic book medium and his success as a television creator will translate to great success as the director of the upcoming mega-blockbuster film The Avengers. Although it appears very risky to entrust a $260 million budget to a director with such an unproven track record of big budget success, Marvel has been spot-on with almost all of their recent directorial choices…well, aside from Louis Leterrier, that is.

Although most of his success has come as an executive producer, J.J. Abrams has also successfully co-created original television series such as Felicity, Alias, Lost and Fringe. Known mainly as a screenwriter, Abrams made his film debut in 2006 with Mission: Impossible III, a relatively unremarkable sequel very loosely based on the television series.

In 2009, Abrams hit the cinematic equivalent of a home run by executing flawlessly with his film Star Trek, a massive financial and critical success. His follow-up film, the 2011 Spielberg-ian Super 8, failed to meet the lofty expectations placed on it, but it displayed evidence of Abrams’ talent as a filmmaker able and willing to work effectively within the expansive canvas provided by big budget filmmaking.

As both the co-creator of numerous successful television series, including the landmark science fiction hit Lost, and an accomplished director of big budget features, Abrams has come the closest to demonstrating that a TV showrunner can become a cinematic visionary. However, he will need to direct a few more exceptional feature films, on par with the excellent Star Trek, in order to achieve true visionary status as a feature filmmaker.

Weiner unquestionably possesses the writing ability to smoothly transition into the world of feature films. However, we need to also examine his skills as a director in order to more completely analyze his potential to become a visionary film director. In order to do so, we will break down a few scenes from the final episode of season one of Mad Men, an episode titled “The Wheel.” I chose this episode because it was written and directed by Weiner.

Although the episode is best known for a scene where Don Draper makes his pitch to a bunch of ‘suits’ from Kodak, we will focus on two scenes involving the Peggy Olson character, played by the wonderful Elisabeth Moss. Peggy Olson has rapidly developed into one of the most memorable characters on television as she has made her ascent from naive secretary to upwardly mobile copywriter at the fictional 1960’s ad agency of Sterling Cooper Draper Pryce.

In the following two scenes, Peggy and her colleague Ken Cosgrove, an account executive at the agency, review actresses for a commercial for the “Relax-a-Cizor”, a device purportedly designed for use as a weight-loss device by women. Of course the device, a belt-like contraption, contains vibrating properties that make it useful for other purposes as well.

In this shot, we see the three actresses behind the glass as they are reviewed and given directions by Peggy and Ken. Note the reflections of both Peggy’s and Ken’s faces on the glass.

Surprisingly, Ken goes against the fratboy-ish mentality that the young male executives at the firm are known for, and expresses a preference for the older and less attractive actress.

Peggy has learned throughout season one to equate confidence with attractiveness. Hiding her pregnancy, which was the result of a one-night-stand with a co-worker, Peggy has gained weight that has made her less attractive to men, making the correlation even more salient in her mind. Furthermore, the halo effect brought on by what Peggy perceives as beauty leads her to hear Annie’s voice as sounding more confident than Rita’s, despite Ken’s comments to the contrary.

Peggy, despite feeling very unattractive herself, demonstrates confidence by standing behind her decision to go with Annie to end this first scene.

In the second scene, we return to the studio a day later and see Annie (the attractive actress selected by Peggy) reading for Peggy and Ken. In the screenshot below, note that as in the previous scene, we see Peggy and Ken as reflections on the glass. 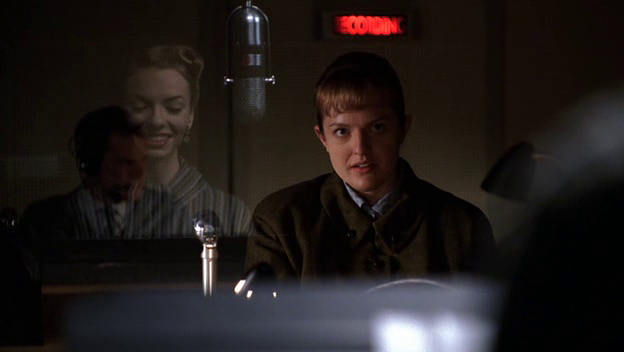 Peggy’s feedback has done nothing to improve Annie’s performance and has become visibly frustrated. Note that this time the camera is focused on Peggy and we see Annie’s reflection in the glass.

In this exchange, Peggy reiterates her belief that beauty equals confidence and also expresses the 1960’s notion that a woman can only achieve true happiness by becoming a prized wife. As a career woman striving for professional success in a man’s world, this belief is the polar opposite of what Peggy has worked towards, but that does not mean the belief is not still ingrained in her mind. 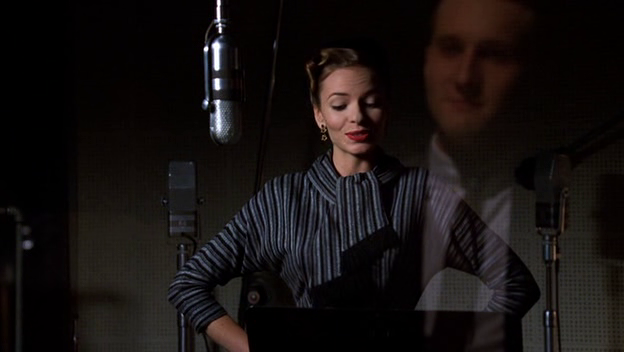 Peggy’s direction has failed once again. Annie’s performance becomes a very unnatural caricature of what a confident person should sound like.

Ken states what many pickup artists claim – that the most attractive women are the most insecure and vulnerable prey for their antics. This of course, once again, goes completely against what Peggy believes is true.

Undeterred and determined to make it all work, Peggy tries again to give Annie direction.

In this exchange, Peggy overtly expresses her subconscious inner belief that if she were thin and beautiful like Annie, instead of secretly pregnant and heavy, she would feel much more secure and confident. Of course, Peggy’s direction only serves to confuse and fluster a teary-eyed Annie even further. I really appreciate how Weiner chooses to conclude this exchange, with Annie stating, “I am being me.”

This commercial was Peggy’s first chance to prove that she could handle the responsibilities of a copywriter and hence, she swallows her pride and admits that she was wrong to choose the younger and more beautiful actress over the older one. The cold manner with which she treats Annie marks a turning point in Peggy’s character, as for the first time, she displays cold ruthlessness to rival her male counterparts in the corporate setting. Throughout the scene, Peggy had demonstrated the confidence that she erroneously attributed to Annie during the first scene, solely based on physical appearance. Upon the conclusion of the second scene, Peggy finally realizes what she truly wants – professional success – and gains a better understanding of how to achieve it.

Weiner packed both of these scenes with easily understandable dialogue, but also included a great deal of subtext related to social commentary and character development. Furthermore, this beautiful writing is greatly enhanced by the effective visuals, especially the artful use of reflections to enhance the two-shots and closeups. Through usage of these reflections, Weiner was able to include reaction shots without the use of editing, making both scenes feel much more fluid.

For further evidence of Weiner’s ability as a director, take a look at this scene from the same episode where Joan (Christina Hendricks), who taught Peggy many of the since-disproved notions about beauty, takes Peggy to her new office as a copywriter.

Weiner has proven with his work on Mad Men and The Sopranos that he possesses the tool set to become a visionary auteur. The impact of these series has been undeniable and nothing in his track record suggests that the skills he has displayed working in the world of cable television will not translate to the making of feature films. Whether or not we would be better off if he stayed in the world of cable television creating more groundbreaking series like Mad Men, instead of directing features, is perhaps the more intriguing question.