Charlize Theron as perhaps the hottest evil queen ever.

By Late Night
Unlike most of the directors featured on Visionary or Hack, not much is known about first-time director Rupert Sanders. He is one of the latest television commercial specialists to make the crossover into features, and his debut film, Snow White and the Huntsman, is a dark, action version of the famous fairy tale. Kristen Stewart and Chris Hemsworth star in the title roles, backed-up by Academy Award-winner Charlize Theron as Ravenna, the Evil Queen. Snow White opens wide on June 1st. 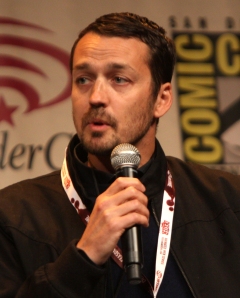 Rupert Sanders, in a photo taken by Gage Skidmore

According to the data on IMDB, Sanders was nominated for a DGA award in 2009 for Outstanding Directorial Achievement in commercials, for spots promoting Monster, Travelers Insurance and Brand Jordan. Okay then, if the Director’s Guild of America likes him, perhaps we should take a look:

Here is the Monster commercial, Legs:

The first two spots are full of make believe and whimsy, sort of what one would expect from a theatrical re-telling of the Snow White fable. The last is a well-regarded sports ad that draws on fan hero worship and the dedication it takes to excel, or to even“Become Legendary,” as the tag line notes. Still, are these enough for a studio to gamble $70 million? Apparently so.

Or maybe it was Sanders’ other commercials: here are all the films Sanders lists on his own website, RupertSanders.com.

The young director put it like this, in this interview by Rebecca Murray for About.com Guide:

“Yeah, if you think of the money we spend on a minute, I’m actually making a fairly low-budget film. I’ve definitely loved doing commercials. I’ve had so much fun. I’ve traveled the world and I’ve gotten to really take on a lot of challenging projects. It’s not exactly the same, but it’s not dissimilar. It’s like riding a bike. Once you’ve learned how to ride a bike, then you can get on a motorbike. It gives you confidence, knowing that you can work with a thousand extras or a massive fight sequence with 600 horses on a beach or whatever it is. I wouldn’t have done it, if I’d been wetting myself every morning, going in there scared. But, life is about taking those risks. It was a high-stakes risk, for myself and for the studio, who very kindly wrote a large check to me to get it done. And they weren’t there whipping me into line, which was great. I was really expecting to be shuttered in, but they were great. They trusted what we were doing and they let us go, which is all you can really ask for in a partnership with a studio.”

Clearly, Rupert Sanders believes in himself, which is a great place for a future visionary to start (and apparently Universal Studios believed in him as well). He also appears to have a great eye for creating fantastic visuals, another good attribute for a visionary. It is much too early to tell if he’s either visionary or hack, but he’s certainly worth watching. He’s got short-form filmmaking down cold; let’s see what he does with the longer narrative.

I’ll end this with my favorite Sanders’ spot, which mixes fantasy with dark humor, and features cameos by Kobe Bryant and Jimmy Kimmel: