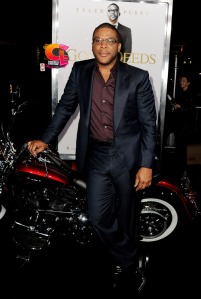 Hacks seem to know that cars and bikes can absolve many sins. (Photo by Kevin Winter/Getty Images)

Tyler Perry is confounding. He has made some crappy movies, but they have all made money (so says Box Office Mojo). He is a successful filmmaker, but he is still a Hollywood outsider.  At VOH, he is considered a solid hack, yet clearly the man has a vision. And while we don’t always like what we see of it, this vision has gathered a large audience of faithful fanatiques.

With his latest, “Good Deeds,” Perry was able to expand that audience, at least by one – me. That story was pitched right to my emotional wheelhouse. In “Good Deeds,” Perry plays a fifth-generation Ivy League-educated African American CEO of a billion-dollar computer software company started by his late father, all of which is revealed in the first two or three sentences of voiceover. The interesting premise somehow overcame the clunky exposition, and the movie jumps into action with the loud arrival of the gifted actress Thandie Newton. This may be the first Tyler Perry movie I ever actually liked.

Why? GOOD DEEDS is an unabashed “good guy” hero fantasy for middle-class black males. Perry’s character has the hot girl, the great job, more money than God and gets even more of it all by the end. Yes, that makes for a nearly non-existent character arc, but hey, did I mention the cool Porsche and Harley?

To be sure, I wasn’t blown away by the production. It was competently solid, if not staid (particularly in some of the cityscape transition shots), but making dazzling cinema has never been Perry’s thing; connecting emotionally with his niche audience has always been the priority, and this time… he got me.

Still, I’m not completely fooled. I’m not ready to let Perry off the hack hook yet. But he did create an entertaining diversion for which I’m willing to give him credit.