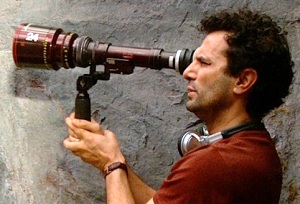 by HakSnider33
MIRROR MIRROR, the fourth feature film directed by acclaimed former music video director Tarsem Singh, will be released theatrically on March 30th.  The film, which is a retelling of the classic fable of Snow White, will star Julia Roberts, Armie Hammer (THE SOCIAL NETWORK) and Nathan Lane.

Despite a rather modest filmography (THE CELL, THE FALL, IMMORTALS), Tarsem has been labeled by many as a “visionary” filmmaker, so highly regarded that he is known on a first name basis by the film community. Is he deserving of such acclaim or does his spotty track record as a feature filmmaker contradict his considerable reputation?

Although Tarsem’s last feature film, IMMORTALS, slightly outperformed modest box office projections, the film was widely derided by critics as nothing more than a ripoff of Zack Snyder’s 300.  Hence, you could say that Tarsem is under some pressure to deliver big with his second consecutive big budget Hollywood film.  Will Tarsem continue to be held in high esteem as a director after the release of MIRROR MIRROR?  Can Tarsem finally live up to his prematurely granted visionary status, or will his upcoming film turn out to be a shitty Snow White movie proving that Tarsem is nothing more than Relativity Media’s equivalent of hack director Zack Snyder?

A highly accomplished director of television commercials and music videos, Tarsem won an MTV Video Music Award in 1991 for directing the video for REM’s “Losing My Religion”. The highly stylized video, heavily inspired by Baroque art and Indian religious imagery, firmly established Tarsem as a filmmaker with the talent to eventually transcend the MTV video genre and transition smoothly into the world of feature filmmaking.

In his feature filmmaking debut, THE CELL, Tarsem once again demonstrated his dazzling visual flair, along with a strong affinity for close-ups on eyes, but he did not really succeed in directing a coherent or intelligent film. His follow-up film, THE FALL, was a relatively low budget passion project that once again provided Tarsem with the canvas to display his talent for crafting lush visuals, but again he fell short in the storytelling department.


A lot is riding on MIRROR MIRROR. Will Tarsem move towards true visionary status or sink into disreputable hackiness?